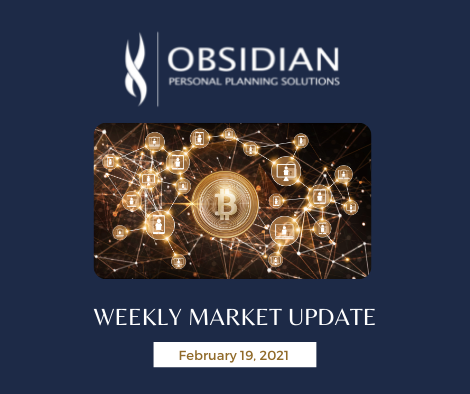 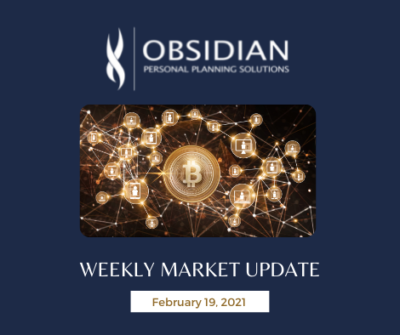 This week we’ll touch on another interesting piece of market news: cryptocurrency and its current rise. Then, because it’s Black History Month, we thought we would share some history around Black involvement in finance and the stock market.

You may have found that just as the GameStop debacle was fading from your mind, bitcoin jumped in to take its place as it broke $50,00​0 for the first time on Tuesday.​

Bitcoin is a digital currency (or cryptocurrency) run by a decentralized authority, not ​the government. It does not exist in a physical sense in the way paper money does. Instead, the balance is in an online ledger everyone has access to, called the blockchain. It is not a legal tender, but it has become increasingly popular in online payment mechanisms.

Buying bitcoin is a precarious proposition. In 2017, bitcoin value went up to $20,000 and then lost 80% of its value the following year. Bitcoin fans point out that the 2017 bubble was driven by retail speculation, whereas this one stems from institutional investor demand and is more stable. However, Skeptics see it as a speculative asset and worry this may be one of the biggest market bubble​s ​in history and point out that bitcoin has no inherent valu​e.​

Before we get onto our information about Black History Month, we wanted to let you know some big news:

Our beloved Patti is retiring, effective April 2, 2021. We will miss her very much, and we know you will too. Keep an eye out for an interview with her in the coming weeks. She’ll reflect on her long career with us and her plans for her well-earned retirement.

We believe in celebrating all people, here​, you can find a list of months dedicated to​ celebrating the richness of our cultural diversity. This month, we’re looking at some Black History Month facts as they relate to finance. Did you know that there is a long history of Black involvement in the financial market, dating back to the turn of the 20th century? We took some time this week to learn about important moment​s ​in Black history related to finance and want to share some with you, too: